Have Smartphones Destroyed a Generation?

The allure of independence, so powerful to previous generations, holds less sway over today’s teens.

One day last summer, around noon, I called Athena, a 13-year-old who lives in Houston, Texas. She answered her phone—she’s had an iPhone since she was 11—sounding as if she’d just woken up. We chatted about her favorite songs and TV shows, and I asked her what she likes to do with her friends. “We go to the mall,” she said. “Do your parents drop you off?,” I asked, recalling my own middle-school days, in the 1980s, when I’d enjoy a few parent-free hours shopping with my friends. “No—I go with my family,” she replied. “We’ll go with my mom and brothers and walk a little behind them. I just have to tell my mom where we’re going. I have to check in every hour or every 30 minutes.”

Those mall trips are infrequent—about once a month. More often, Athena and her friends spend time together on their phones, unchaperoned. Unlike the teens of my generation, who might have spent an evening tying up the family landline with gossip, they talk on Snapchat, the smartphone app that allows users to send pictures and videos that quickly disappear. They make sure to keep up their Snapstreaks, which show how many days in a row they have Snapchatted with each other. Sometimes they save screenshots of particularly ridiculous pictures of friends. “It’s good blackmail,” Athena said. (Because she’s a minor, I’m not using her real name.) She told me she’d spent most of the summer hanging out alone in her room with her phone. That’s just the way her generation is, she said. “We didn’t have a choice to know any life without iPads or iPhones. I think we like our phones more than we like actual people.” 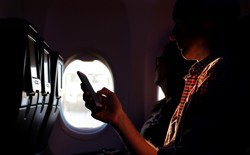 Your Smartphone Reduces Your Brainpower, Even If It’s Just Sitting There

I’ve been researching generational differences for 25 years, starting when I was a 22-year-old doctoral student in psychology. Typically, the characteristics that come to define a generation appear gradually, and along a continuum. Beliefs and behaviors that were already rising simply continue to do so. Millennials, for instance, are a highly individualistic generation, but individualism had been increasing since the Baby Boomers turned on, tuned in, and dropped out. I had grown accustomed to line graphs of trends that looked like modest hills and valleys. Then I began studying Athena’s generation.

Around 2012, I noticed abrupt shifts in teen behaviors and emotional states. The gentle slopes of the line graphs became steep mountains and sheer cliffs, and many of the distinctive characteristics of the Millennial generation began to disappear. In all my analyses of generational data—some reaching back to the 1930s—I had never seen anything like it.

The allure of independence, so powerful to previous generations, holds less sway over today’s teens.

At first I presumed these might be blips, but the trends persisted, across several years and a series of national surveys. The changes weren’t just in degree, but in kind. The biggest difference between the Millennials and their predecessors was in how they viewed the world; teens today differ from the Millennials not just in their views but in how they spend their time. The experiences they have every day are radically different from those of the generation that came of age just a few years before them.

What happened in 2012 to cause such dramatic shifts in behavior? It was after the Great Recession, which officially lasted from 2007 to 2009 and had a starker effect on Millennials trying to find a place in a sputtering economy. But it was exactly the moment when the proportion of Americans who owned a smartphone surpassed 50 percent.The more I pored over yearly surveys of teen attitudes and behaviors, and the more I talked with young people like Athena, the clearer it became that theirs is a generation shaped by the smartphone and by the concomitant rise of social media. I call them iGen. Born between 1995 and 2012, members of this generation are growing up with smartphones, have an Instagram account before they start high school, and do not remember a time before the internet. The Millennials grew up with the web as well, but it wasn’t ever-present in their lives, at hand at all times, day and night. iGen’s oldest members were early adolescents when the iPhone was introduced, in 2007, and high-school students when the iPad entered the scene, in 2010. A 2017 survey of more than 5,000 American teens found that three out of four owned an iPhone.

The advent of the smartphone and its cousin the tablet was followed quickly by hand-wringing about the deleterious effects of “screen time.” But the impact of these devices has not been fully appreciated, and goes far beyond the usual concerns about curtailed attention spans. The arrival of the smartphone has radically changed every aspect of teenagers’ lives, from the nature of their social interactions to their mental health. These changes have affected young people in every corner of the nation and in every type of household. The trends appear among teens poor and rich; of every ethnic background; in cities, suburbs, and small towns. Where there are cell towers, there are teens living their lives on their smartphone.

To those of us who fondly recall a more analog adolescence, this may seem foreign and troubling. The aim of generational study, however, is not to succumb to nostalgia for the way things used to be; it’s to understand how they are now. Some generational changes are positive, some are negative, and many are both. More comfortable in their bedrooms than in a car or at a party, today’s teens are physically safer than teens have ever been. They’re markedly less likely to get into a car accident and, having less of a taste for alcohol than their predecessors, are less susceptible to drinking’s attendant ills.

Psychologically, however, they are more vulnerable than Millennials were: Rates of teen depression and suicide have skyrocketed since 2011. It’s not an exaggeration to describe iGen as being on the brink of the worst mental-health crisis in decades. Much of this deterioration can be traced to their phones.

Even when a seismic event—a war, a technological leap, a free concert in the mud—plays an outsize role in shaping a group of young people, no single factor ever defines a generation. Parenting styles continue to change, as do school curricula and culture, and these things matter. But the twin rise of the smartphone and social media has caused an earthquake of a magnitude we’ve not seen in a very long time, if ever. There is compelling evidence that the devices we’ve placed in young people’s hands are having profound effects on their lives—and making them seriously unhappy.

In the early 1970s, the photographer Bill Yates shot a series of portraits at the Sweetheart Roller Skating Rink in Tampa, Florida. In one, a shirtless teen stands with a large bottle of peppermint schnapps stuck in the waistband of his jeans. In another, a boy who looks no older than 12 poses with a cigarette in his mouth. The rink was a place where kids could get away from their parents and inhabit a world of their own, a world where they could drink, smoke, and make out in the backs of their cars. In stark black-and-white, the adolescent Boomers gaze at Yates’s camera with the self-confidence born of making your own choices—even if, perhaps especially if, your parents wouldn’t think they were the right ones.

Fifteen years later, during my own teenage years as a member of Generation X, smoking had lost some of its romance, but independence was definitely still in. My friends and I plotted to get our driver’s license as soon as we could, making DMV appointments for the day we turned 16 and using our newfound freedom to escape the confines of our suburban neighborhood. Asked by our parents, “When will you be home?,” we replied, “When do I have to be?”

But the allure of independence, so powerful to previous generations, holds less sway over today’s teens, who are less likely to leave the house without their parents. The shift is stunning: 12th-graders in 2015 were going out less often than eighth-graders did as recently as 2009.